The drama program at DeAngelis Studios was lucky enough to receive a special visitor on their opening night of The Swan Princess. Seldon Young, the producer of the original 1994 film, traveled from Utah to be at the first performance of the stage adaptation of the animated classic.

Seldon did not come empty-handed from Utah, though his presence would have been more than enough. As a special gift to the studio’s drama program, he brought with him an original hand-painted art cel from the 1994 film! This is a rare and amazing piece of Swan Princess history that DeAngelis is proud to display and keep safe!

The Swan Princess – an animated film based on the folk tale and ballet of Swan Lake – was the first in a long string of releases in the franchise, and was the top-selling video in the United States upon its original release. With 2019 marking the 25 year anniversary since the original production was unveiled this was truly a great way to celebrate.

The Drama at DeAngelis Studios cast, directed by instructor Amanda Beveridge was thrilled to be a part of this amazing legacy, and hope that it is just the first of many stage adaptations to come!

Congratulations to Our Seniors! You Rock!!! 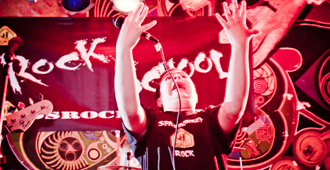 We have a wide range of music lesson times
to fit your busy schedule!